Outfit: Salt and Pepper- Becca Corsage and Skirt @ We ❤ RP 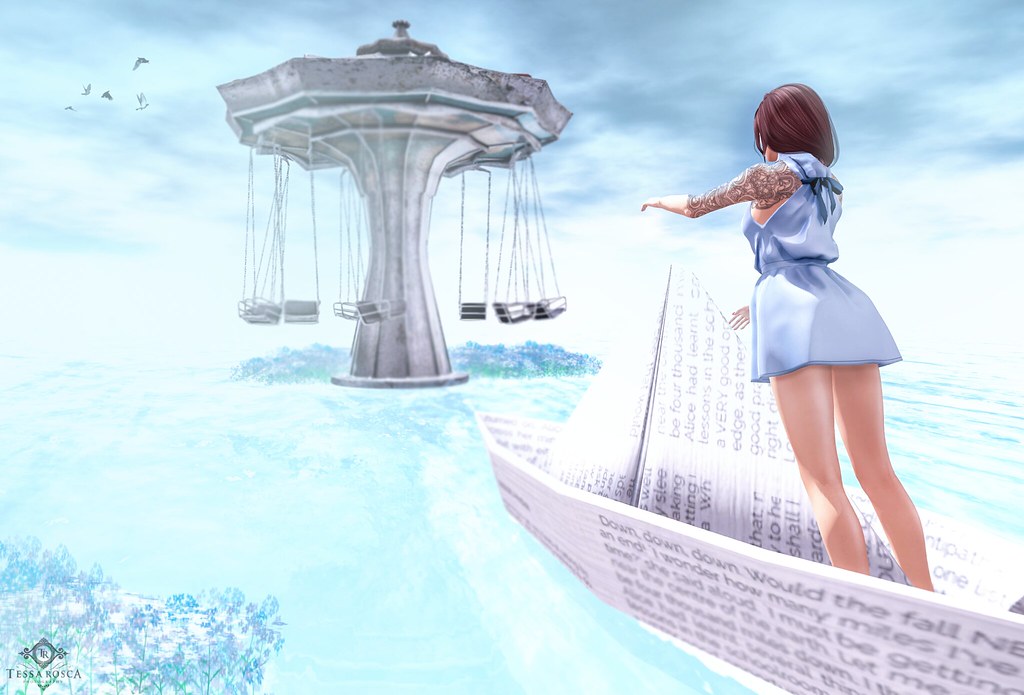 I am often accused of being childish.  I prefer to interpret that as child-like.  I still get wildly enthusiastic about little things.  I tend to exaggerate and fantasize and embellish.  I still listen to instinctual urges.  I play with leaves.  I skip down the street and run against the wind.  I never water my garden without soaking myself.  It has been after such times of joy that I have achieved my greatest creativity and produced my best work. ~Leo F. Buscaglia, Bus 9 to Paradise

I’m back!! You had no idea I left did you? Family came in town and it is so hard to try to attempt to do anything with kids running all around. I checked my email once and got attacked with “What are you doing?” questions. I logged back in and just sat down… easy enough right? It ended up being a perfect time to show you two items which are kinda new. At least new since the last time I was able to get on… Enjoy and TOOTLES!

Just stopping by before I head out on a hot date. I mean the Perfect Date dress isn’t titled this for no reason! I also stopped by The Gacha Garden to do a little shopping. This is yet another gacha event with a twist. I posted about one the other day and I like both of these events. The Gacha Garden is a fun event where every 20th time you play you will receive a gift. This gift is alled the Seed of Inspiration. We all need some inspiration to keep playing gachas sometimes when we we aren’t getting what we want. At the end of The Gacha Garden, your seed of inspiration will not be sold again. This is a super kind of inspiration of course 🙂 Now go shop! TOOTLES

I have given this topic quite a bit of thought. The topic I am referring to is of the heart. I sat back thinking about the people who guard themselves. I think every person that reads this blog will be able to think of at least one person who guards their heart from anyone. I honestly feel like there are different reasons for guarding and I wanted to cover some of those and why I think all of this can be good and bad.

First, you need to know what guarding your heart and yourself means. I think the simple answer is that people are tired of getting hurt. They are tired of letting things that don’t matter on an every day basis effect their life. For this reason people will do what they can to guard themselves from being hurt. No one likes to feel disappointment or hurt and especially from things that come from Second Life.

I have heard some things like… “I am in a virtual world and don’t care to let people know anything about myself.” Another comment I have heard is, “I have gotten hurt in the past by opening up, so I choose not to open up to anyone anymore”. These are two very valid statements when you talk about opening up to others in Second Life. I have personally protected myself in the past from constant lies. Lies can come from many things, but we mostly see lies coming from relationships in Second Life.

I think it is important to acknowledge the lies that we tell ourselves before we deal with the lies that we are told by others. A major lie that is told by yourself can be that you need someone else to add value to yourself. The truth is that no one else can add value to your life except you. By living down this lie that you tell yourself you can save yourself a ton of heart ache when or if a relationship ends. Another lie you tell yourself is that everyone is in a relationship so you need to be in one as well. The truth is that you need to do what is right for you and not what others are doing. You have to believe that you are worthy enough to wait for someone and not just settle for what is right now. Do not cheapen yourself. There are many other lies that can be said, but I believe these two are the absolute worse in SL.

Next you need to watch the lies that are told to you. This is where things can get tricky. Most automatically think of a situation where you were lied to in Second Life. I can think of two specific situations which I think most can relate to as well. One was when a family member lied about every aspect of their life to the point of not knowing what was true and what wasn’t. Why tell someone something that isn’t true? We should always focus on what the truth is and if you do not want to share something, then just don’t say anything. That is easier than telling a lie that could potentially hurt someone else. The second thing would be a lie from a partner in Second Life. This partner could be a boyfriend or a girlfriend that you are dating or someone that you are actually partnered to. Whatever type or relationship you have, when lies are told it is hard to gain the trust back. There are some who choose just to never go there and so they think they are safe… but are they?

I often wonder what you get by being distant from others. I tried this at one point and all I became was miserable because I shut people out of most of my life. Yes, I still had general conversations with people, but I never felt like I was better off that way. Maybe I wasn’t ok with shutting people out from my heart because I had been on both side of things. I felt like it is better to open up with a chance of getting hurt than to never know what it feels like to have people genuinely care about you. I am not saying not to guard your heart against the many people who try to enter it, but I think its important to notice who matters and who is worth the time to let in. How to find that out is really up to you! TOOTLES!

My little mini vacation was so worth the time. I am glad to be back though and ready to get back to my regular routine of things. I will slowly be backing away from blogging so much. I would like to concentrate a lot on photography and just enjoying SL again. I think most can relate that we get busy and we forget the real reason why we enjoy Second Life so much. I guess I have forgotten why I started blogging in the first place. The last couple of days has really made me think on this and I will continue to figure out what is the best thing for me here. I hope you all can understand! TOOTLES 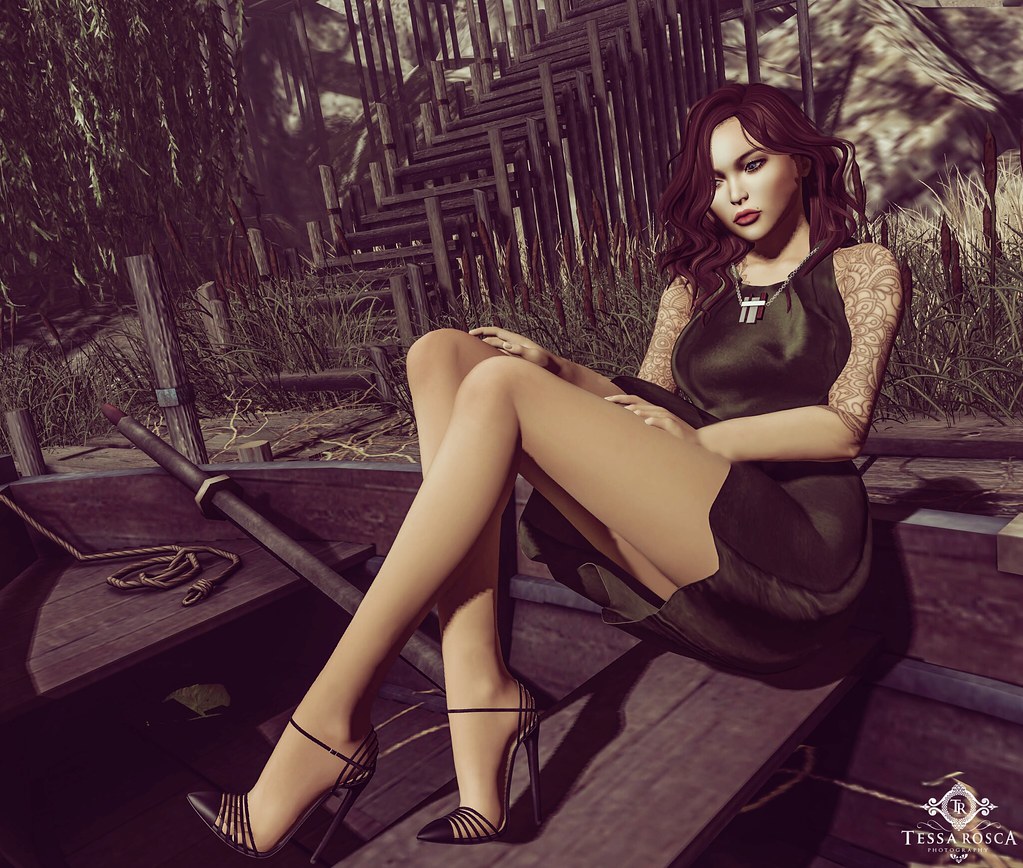 I am trying to make sure that I get every item blogged that I need to show before I leave for vacation on Sunday. I will be checking in rarely and will not be able to blog, so please forgive me if I am not able to show you everything before then. Everyone needs a vacation right? I also want to mention that Essenz is having her 2nd anniversary sale in store until July 26th. I know this is short notice, but you have plenty of time to still run along and shop. All single shoes are 50% off and fatpacks are discounted to 30%. That is a heck of a deal since her shoes can go with anything and are so amazingly made. One of the best on the grid for sure. TOOTLES!

I Robbed The Woods

I robbed the Woods —

Brought out their Burs and mosses

My fantasy to please.

I scanned their trinkets curious — I grasped — I bore away —

What will the solemn Hemlock —

What will the Oak tree say?

I absolutely love fantasy poetry and this photo made me think of this poem that I had studied in college. Emily Dickinson is a very famous name which most will know so why not pair that with a famous SL name like FINESMITH? I hope you enjoy this photo as much as I did to create it. TOOTLES

I have been extremely busy in real life, but I wanted to take a chance to let you know a few things. First off, The Skin Fair begins tomorrow. I have already shown you a beautiful Tess skin by Belleza in my previous post, but now I want to show you Doretta. I am absolutely in love with this skin from Pink Acid. There are very few TMP mesh head appliers that I actually like, but this one has become the top of my list. This skin is available in five different shades. The next big thing to know is that Soonsiki has moved and now has a new fatpack out as a group gift. The hair above is called Diamond and I love the wave. My hair does this naturally when its humid so I just had to grab it. Last but certainly not least, Designer Showcase is still going on for the month of March. I haven’t really been around to blog for this event at the beginning of the month. Some cute stuff this round that needs to be seen. Great prices as well! I think that is all for now so enjoy 🙂 TOOTLES

October is by far my favorite month of the year and not just because its when my birthday is. I am freaking excited about Halloween because it is the one time of the year I can dress like a crazy person and no one think it is the truth! ;P This is very tame compared to what I have in mind, but I am slowly getting there! I got in the mood and visited Pumpkin Town tonight. There are a few booths around and all kinds of fall trick or treat sets to look into. I followed the long path with those trick or treaters to this haunted mansion. All the fog and stairs just added to the suspense before you open the door to the mansion. I was dodging ghost popping out to take this photo so I am lucky I even got this. How do you dress up for Halloween? I can’t wait to see everyone’s costumes coming up! so fun 🙂 TOOTLES!