FashionTropics begins today and the place you can find me is right on the beach enjoying all the wonderful items. I got lucky and got to preview these items before the opening. I get to relax while the rest of you fine people get to shop! Enjoy the experience and have a tropical day! TOOTLES

I am slightly obsessed with all things underwater. I don’t know if it is just the unknown or the fact that the colors are just so beautiful. I felt the need to do something underwater for the FashionTropic event starting tomorrow, plus it is SHARK WEEK!!! I am also obsessed with Discovery Channel’s Shark Week. So far I have seen the most guts poured into the ocean, but also I have heard some very educational information about sharks and underwater life. Sharks would definitely be one of my biggest fears. EEK! Something about them that causes fear also causes me to be extremely curious. Not curious enough to get in the water with them of course. I even get that sinking feeling when I see a shark in SL. Pathetic maybe? Oh well! On another note, enjoy the shopping experience which opens tomorrow. iNOVARE has done a great job on this event. TOOTLES

There are definitely fireworks happening but not the kind you see in the air! ROMP has begun and there are plenty of sparks to find at this event. You will see everything and anything you can get your hands on that feels sexy and a little dangerous. Here are just a few items you can find and I encourage you to go see all the yummy things yourself. TOOTLES!

Pose: Rack poses- Who’s Are You? pose with handcuffs @ ROMP 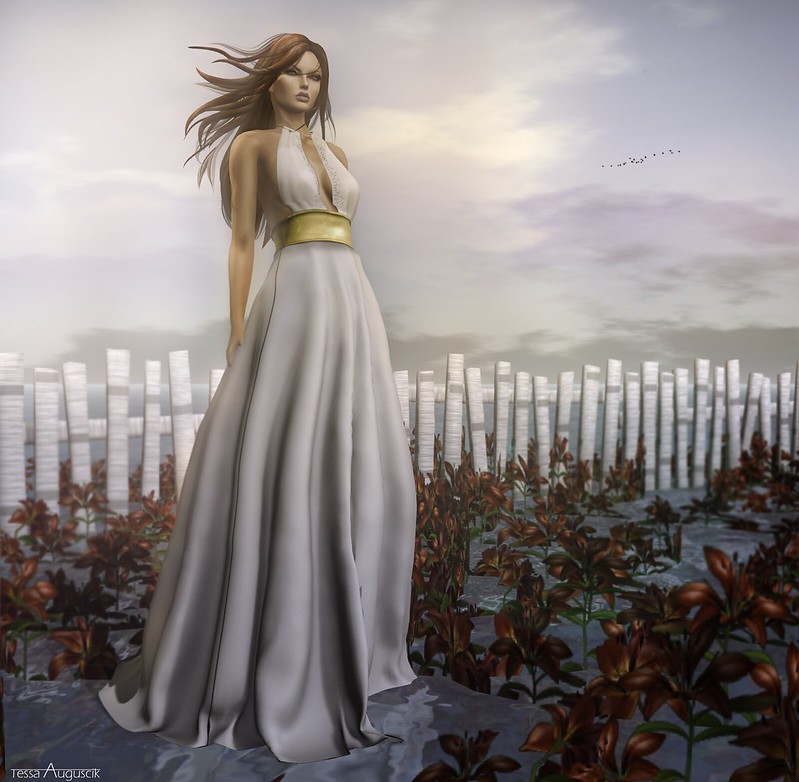 Second Life, for most people, is a release from things that may stress them in RL. This is certainly the case for myself. I come here to be creative and have a little bit of a release during the crazy times. The next two weeks will be no different for myself as I begin to have finals for some of my classes and some major papers due. That plus work… I will be bald I tell ya! Before it gets crazy I wanted to remind you that the Seraphim Social will begin tomorrow, February 19th, and run until March 5th. This gives you a little time to enjoy this rounds theme which will be Ethereal! Think of all the colors on the spectrum and that is what you can expect to see. This specific dress by Dead Dollz reminded me of a heavenly range of colors. I am in love! Also came with a sheer option for the top.  Have a great week shopping and hope I can slow down enough to see what else is up for grabs there. TOOTLES!

Meme instructions: Dress up your avatar as a character from a movie.

I had a few movies in mind when it came to this Monday Meme from Strawberry Singh. I loved her Labyrinth movie photos. How could I forget that movie! I still love to sit down and watch it, but haven’t gotten my son interested in it just yet. A few of my ideas ranged from Gone with the Wind, The Goonies, Radio Flyer, Star Wars, and even ET. I guess most girls would say I had a weird taste in what I liked in movies. One movie though that I remember watching over and over as a kid was The Little Mermaid. I was kind of obsessed because for some odd reason I felt like her. I never felt like I belong in a certain place sometimes and of course having the red hair was a given. Instead of doing a scene right out of The Little Mermaid, I decided to do my own interpretation of it, which of course is what most of these will be. I give major kudos to anyone who can do a direct replica of a scene from their movie. Well… just a short post for today… Mondays are as usual.. TOOTLES!

“When virtue and modesty enlighten her charms, the lustre of a beautiful woman is brighter than the stars of heaven, and the influence of her power it is in vain to resist.” – Akhenaton